Another one of the cheap warbands to bring into Mordheim are the skavens with their mass of rattitude and fighting claws / slings they can put up quite a fight. I don't personally own a warband of them myself but a few people at my local Games Workshop and from what I can tell they decided to use the Night Runners box to make their warband from.

The box not only comes with 20 rats (max warband size) but also some fighting claws, spears, clubs, swords, slings, and what you need for a tail weapon / dagger / weeping blades. Though I'm not sure about pistols, halberts, and flails for them. I would suggest you pick up an assassin for your leader just because they look so cool, you won't have too as long as you make your heroes a bit more unique.

You'll definitely be the joy in a campaign with all those henchmen for the slaughter slings. When deciding on what I wanted to do next besides Reikland Mercenaries, Skaven was up there since all I needed was a box and some more paint, alas though we have a few Skaven players in the campaign right now so I decided to hold off on that for another day.
Posted by Serge-David at 12:37 AM No comments:

So you want to start Mordheim but you only want to buy a single box of guys. Well I have good news for you then and this is the same thing I did myself.

You'll want yourself a box of Empire Malitia!

This box has enough bodies to make 20 humans (average maximum warband size for Mercenaries is 15) with bits for swords, axes, clubs, bows, cross bows, blunderbuss / rifles, and pistols. So you'll have plenty of modeling options.

A cool option to do with your five starting heroes to set them apart from your henchmen is to take the five cloaks from the box and put those are your heroes. It really sets them apart though don't model them exactly alike (same head + legs) as the idea is everyone in Mordheim is slightly different from each other.

Currently I've only assembled 10 of my 20 guys (I haven't expanded my warband size much yet and I got 6 extra archers out of a trade though two are painted), but it is enough to run a heavy hitting warband and when I want to expand my numbers I'll assemble and paint another two / three guys to fill out my henchmen even more. 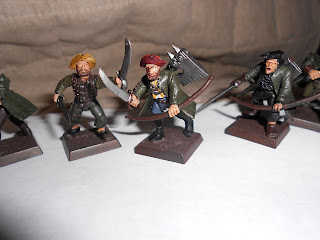 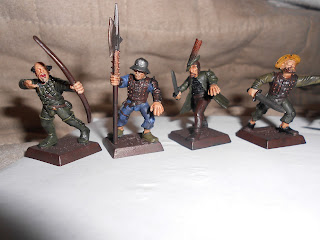 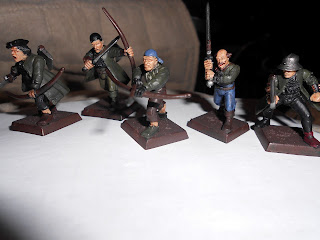 The only bit of conversion required was the sword in the left hand (cut it off a right hand and glued it on an empty / use to be dagger left hand), and if you want to go WYSIWYG (What you see is what you get) then you'll need to kit bash or scratch build shields / bucklers. (Most have daggers strapped to their legs, most hats can be used as a helmet and most can be said to wear light armor though heavy armor could be stretching it). Also the easiest way of modeling two weapons is just putting the second on the characters back / side / leg (Like I did for the axes since it is easier to shave off a hand then to stick it on another one, and the bow looks better in a hand anyway)

EDIT:
So this box should be able to hand Reikland, Marienburgers, Middenheimers, Pirates (experimental), Norse(experimental), Ostrander, Kislevite, and Averland warbands along with "The Outlaws Of the Stirwood Forest" though if I find a better box for this or that mercenary group or other human group (Norse for example) I'll make a separate entry for them, the Empire Malitia box really is a catch all for most human warbands.
Posted by Serge-David at 12:17 AM No comments:

So recently I've gotten into a game called Mordheim thanks to my local Games Workshop where I play another two of their games called Warhammer 40,000 and Lord of the Rings. I'll let others more skilled then I talk about what wargaming is and why it is the bees knees, but I can definitely tell you that it is a fun hobby that gets you to interact with others face to face.

Thanks to my local Games Workshop (The Bowie Bunker) building us a beautiful table with a real working wizard clock tower and started both a Mordheim League and Campaign, it has become quite popular here. There are at least 15~20 people who are actively in the campaign and more in the league so when it is Wednesday or Friday (official Mordheim days here) there gets to be a nice sized line of people ready to play.

The best part about Mordheim too is that it is one of the cheapest Games Workshop games and quickest to get into with its low model count and the rulebook is hosted on GW's website. Average game length is about 30 minutes with another 15 to manage all the campaign post-game setup such as gaining experience, leveling up, and hunting for gold crowns (money). Also you should check out Mordheimer for pretty much all the important stuff about Mordheim in a single spot which includes the unofficial and experimental warbands. Tough sadly Games Workshop has not given Mordheim much love in the last few years our League and Campaign organizers have been tweaking this and that to enhance the experience and balance the different warbands a bit better along with adding more flair. An example they're working on is allowing a goblin in an Orcs and Goblins warband to get "That Lads got Talent" by fighting the warband leader and winning.

Oh yeah, so talking about campaign earlier I'm playing a Reikland Mercenary warband with a Drinking Den (encampment) along the river side on the harbor. So when my encampment is attacked by another warband I'll be defending my booze ship from those varmints who're trying to take me rum! As clarification for anyone who has played Mordheim we get to model a 12" by 12" inch square representation of our encampment to use on the table, and mine is mine will be a boat with a bar on it, because it is awesome. Another guy got a graveyard and is constructing one for his base.

Also for a future note, I'll be making a few posts about what warbands you can make with a single box of Fantasy along with pictures! Also we've got a Necromunda table almost built so expect some more specialty games on here besides 40k (my main game I play besides mordheim at my local Games Workshop).
Posted by Serge-David at 11:28 PM No comments: