So my local gaming group has started getting into Battlefleet Gothic along with blood bowl but I'm more interested in Battlestar Gothic. It seems like a pretty interesting game and another small specialist game where I can have my entire army painted relatively quickly. I'll probably start talking about this game soon when I get stuff to update with it.

From what I know my local group is mostly consisting of Imperium, Chaos, and one or two play other races like Orks and Eldar. Sadly there isn't much to easily do Battlefleet Gothic on the cheap except with alternate model companies and tyranids (There is a very nice youtube video about scratch tyranids). I'll be looking more or less though to see what I can do to make a nice fleet that is GW approved (50% or more).

After looking at the armies I've decided that I want to play Adeptus Mechanicus since no one else has a fleet of them yet here. After reading up on them they seem like an interesting fleet to play, especially with the random nature about it.
Posted by Serge-David at 7:45 AM No comments:

I'm a believer in the multiverse theorem that there exists an infinite number of universes where each universe is slightly different than the next. These differences can be as small as one person decide to have soup instead of a salad for lunch one day or as large as the speed of light being different then our own. In the multiverse everything and anything is possible because in an infinite number of universes, expecially how large and varied ours is anything can happen.

When thinking about the multiverse I stumbled upon the question of "Is there a universe where everything is exactly the same as this universe with the only difference being that it is an hour slower then ours." This being that from start to end these two universes are the exact same with the only difference being that one started before the other. If this is allowed into the equation then that means that every second this universe is being created and ending at the same time across the multiverse. However jumping down a few levels into the fourth dimension (time) a quote comes to mind.

Time is relative and we can only observe it in slices. Now I've been thinking about when universes are born in the multiverse. Are they created every second when the possibility of chance comes into play such as is another universe born if we decide to sleep in one day and in the other we don't. Now this kind of thinking can make sense if our universe gets split into thousands upon thousands of multiple universes every hundred millionth of a second to cover all possible alternatives for everything that could happen. However I don't like this idea that much since time is relative and therefor doesn't even enter into when a universe is added to the multiverse.

What I believe is that instead of splitting from each other they all start out from the beginning and play to the end of their existence. So all possible universes in the infinite numbers of the multiverse, they all exist at the same time and since time is relative every point in their histories also exists at the same time when viewed in such a manner. So instead of there being an infinite number of the same universe where the only difference is when it was made you would instead be looking at the same universe along different points in its history.
Posted by Serge-David at 11:02 PM No comments:

So yesterday I just finished painting up my wizard, and by I mean finished I mean I'll work on him again for some minor details later. I'm going to call it done now though but later I'll probably highlight his face, some white in his fire hair, and rune work along the red parts of his robe. Also I want to do something with the pages of the book so it says something like "Cheese" or try to make it the magic section or something and I kind of want to do those logo's on the bottom (I have the barcode). 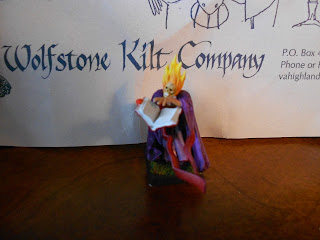 I really love the way the flames came out, and with one layer of yellow glaze, yellow shade, orange shade, red glaze it is no surprise! After finishing it someone commented that my fire is actually backwards as the hottest parts should be the yellow areas. After thinking about it and not wanting to redo it I've decided that it makes more sense with "MAGIC". And if you notice his head is actually a hand holding a skull on fire, because he's an awesome flaming skull head wizard reading the rule book.

Back-story of hair and wizard as follows. 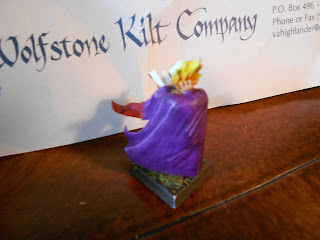 At the rewarding academy known as Elementary College of the Magical Arts (ECoMA) a young wizard's apprentice snuck into his masters private library (on a dare) and cracked open one of the oldest books on the nearest shelf. Skimming a few pages in he decided to test out his budding abilities and spoke one of the spells aloud in words of power. Of course with ancient magics such as those in this enchanted enchantment book our young apprentice managed to set fire to one of the libraries curtains. In his panic he tried undoing the spell with the only logical way possible, he read the spell backwards. Now this may seem like a silly idea to you but all words of power hold within them two separate forces held together in balance until tipped in either direction by one who knows how to call their power forth.

Sadly for our young apprentice he stumbled a bit in his haste and read too hastily causing his own head to catch on fire along with severing it from his neck. Now this might seem disastrous but luck was on his side as the magic that ignited and decapitated him did not sever him but magically separated the two parts and protected them as the fire did not burn his flesh but was cool at the source. Having your head rolling around on the floor was quiet disconcerting though so of course he tried to undo his second mistake and of course it it got worst as his neck grew fingers and the flesh on his head sloshed off as he picked it up.

Too ashamed to face his master after all that had happened too and in his library the young apprentice grabbed his head in one hand and ran from the academy into the near by woods. He now travels the land reading that book of his ever trying to find the right combination of words to undo the mess he landed himself in that fateful day. (Or something like that) 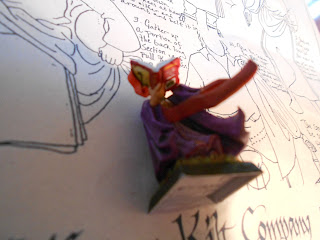 Kudos to the first person who realizes the slight error in the last image and says what I did wrong. Anyway I can't wait until I can field him on the plains of battle. In Mordheim he'll be my hired Wizard / Warlock or even my necromancer when I get some zombies for an undead warband. What does everyone think by the way?
Posted by Serge-David at 9:28 PM No comments: